To deal with the problem of abuse of synthetic drugs and New Psychotropic Substances (NPS), the government is considering generic scheduling of drugs to replace the practice of substance-by-substance scheduling.

India and the Issue of Drug Trafficking

Farooq Abdullah and Pragya Thakur have been nominated as members of the consultative committee of Parliament for the Ministry of Defence.

The Ministry of Home Affairs (MHA) has cancelled the citizenship of Chennamaneni Ramesh who is a Member of the Legislative Assembly (MLA) from Vemulawada in Telangana.

The Indian Veterinary Research Institute (IVRI), Uttar Pradesh has confirmed avian botulism as the reason for mass mortality of birds, at Sambhar Lake in Rajasthan. 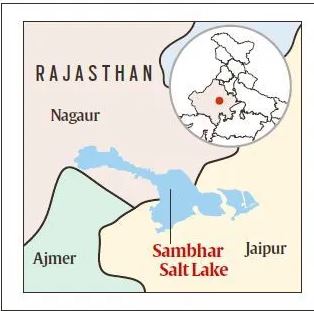 The Union Minister for Road Transport and Highways informed about the Central Road and Infrastructure Fund in Lok Sabha during the winter parliamentary session (2019).

The extensive use of tear gas by the police in Hong Kong's protests and the lack of government-led cleansing and decontamination procedures has generated mounting public concerns about potential short and long-term health effects of tear gas.

Definition: Tear gas, also called lacrimator, is a group of substances that irritates the mucous membrane of the eyes. This causes a stinging sensation and tears. They may also irritate the upper respiratory tract, causing coughing, choking, and general debility (physical weakness).

Background: It was first used in World War I in chemical warfare, but since its effects are short-lasting and rarely disabling, it came into use by law-enforcement agencies as a means of dispersing mobs, disabling rioters, and flushing out armed suspects without the use of deadly force.

Substances Used: The substances most often used as tear gases are synthetic organic halogen compounds. They are not true gases under ordinary conditions but are liquids or solids that can be finely dispersed in the air through the use of sprays, fog generators, or grenades and shells.

Types: The two most commonly used tear gases are:

The term ‘Green Steel’ refers to a steelmaking process that lowers greenhouse gas emissions, cuts costs and improves the quality of steel. This can be done through usage of gas in place of coal, recycling steel etc.

Editorial on Transparency in the Criminal Justice Administration

Mains Practice Question (GS paper 1) - "Discuss the reasons for the decline of the Maratha Empire till the 19th century."