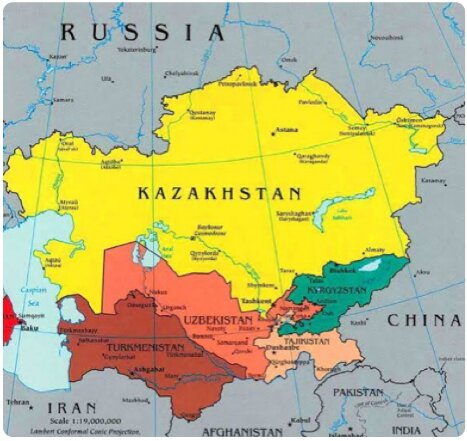 Central Asia is the geographical centre of Asia that marks the confluence of the world’s four religious ideologies — Islam, Buddhism, Christianity and Hinduism. Modern Central Asia consists of five nations: Kazakhstan, Kyrgyzstan, Tajikistan, Turkmenistan, and Uzbekistan. All five nations became independent after the collapse of the USSR in 1991.

The region grew in strategic importance to India during the 1990s and particularly over the past decade.

Over the past decade, the region has become the site of great power tussles over energy resources. At the same time, the world witnessed India’s rise as an economic power and a regional power makes it important to prioritise its relations with Central Asia.

It was in this context that India formulated its Connect Central Asia Policy in 2012, which is a broad-based approach including political, security, economic, and cultural connections.

Central Asian countries are important for India’s bid to become a permanent member of UNSC.

The development of the SCO has confirmed the viewpoint that the region has become the host of a new great game. India in this setting can act as a big player in the region to aid Russia in balancing for both the American and Chinese presence.

India’s foreign policy must form a critical balance of realpolitik and moralpolitik, so that India not only remains a great power “candidate” but also becomes a great power “status holder” in the region.