This article is based on “Shift focus to the maritime domain” which was published in The Hindustan Times on 05/07/2020. It talks about the need for India to develop a holistic maritime strategy.

Amid recent clashes between India and China over Galwan valley, Indian Prime Minister, while addressing the armed forces, held that the “era of expansionism is over”. This signalled India's stance that it will not abide by the Chinese Aggressive posture at the LAC.

Though India and China finally agreed to withdraw their troops and agreed to work for mutual peace and cooperation, India should remain wary of Chinese tactics of salami-slicing. Under this strategy, China goes for territorial expansion in small proportion through military intimidation while proclaiming its commitment to peace and tranquillity.

In this context, it is argued by many foreign policy experts that India should counter China not only in land frontiers but also in the maritime domain. Thus, there is a need for a comprehensive maritime doctrine for India.

Security Imperative: Apart from China’s aggressive posture around land borders, its military presence is growing in the Indian Ocean too. This can be depicted by the strategy of String of pearls.

Geo-Economics of Indian Oceans: Geopolitics is entwined with geoeconomics and its focus on matters of control and access to economic resources.

India’s Geo-strategic Location: India is centrally located between the eastern and western stretches of the Indian Ocean, thereby able to deploy naval forces in both directions more easily than other littoral states in the Indian Ocean.

Establishing Sagar Panchayat: India can collaborate with Indian Ocean Rim countries to establish the common good order at sea. Given India’s geostrategic location, it could sherpa a cluster of Indo-Pacific nations into a “sagar panchayat” and uphold the rule of law at sea.

Strategic Alignment: In order to secure Sea Lanes of Communication, enhancing interoperability at sea, intelligence- sharing and maintaining freedom of navigation, India should work together with like-minded nations.

Exploiting China’s Maritime Vulnerability: Though China has shown aggressive posture in the South China Sea and as well as Indian ocean, it has been anxious about its vulnerability at sea — or what is referred to as the Malacca dilemma.

The simultaneous rise of India and China is an important paradigm shift in the international system. This new paradigm shift will require India to focus on not only land boundaries but also maritime security. 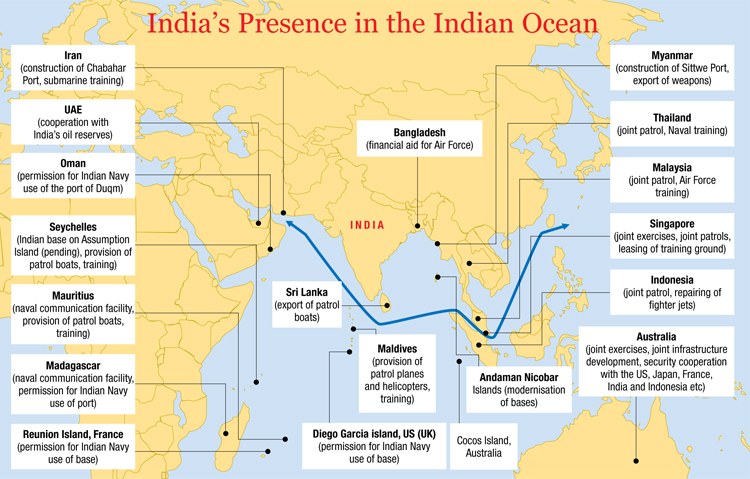 This editorial is based on “A case for extension: On rural jobs scheme” which was published on July 9th, 2020. Now watch this on our Youtube channel.