This article is based on ‘Dormant Parliament, fading business’ which was published in The Hindu on 27/03/2021. It talks about the deteriorating efficiency of the Parliament and related issues.

The Parliament of a country is central to the very idea of democracy assigned with the pivotal roles of framing legislation, ensuring accountability of governments and holding debates and discussion on various concerns.

In this context, the Parliament of India, even after so many years, has neither evolved nor matured as it could, might or should have.

Shorter Parliamentary sessions and leniency in the scrutiny of the Bills have diminished the stature and efficiency of the Parliament.

To preserve the very idea of India as a democratic country, the Parliament needs to function more actively in terms of framing bills, its scrutiny and holding sessions.

Dormancy in Parliament and Related Issues 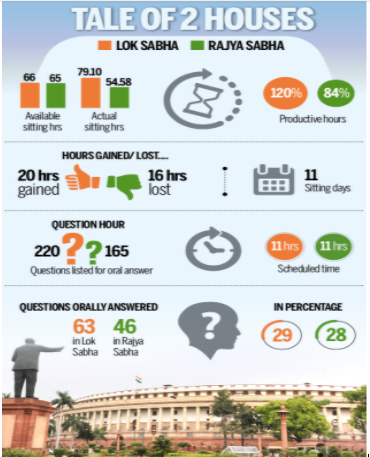