This article is based on "Journey to a beginning" which was published in The Indian Express on 30/10/2019. It talks about various narratives of Kartarpur Corridor.

India and Pakistan signed a landmark agreement to operationalise the historic Kartarpur Corridor to allow Indian Sikh pilgrims to visit the holy Darbar Sahib in Pakistan. 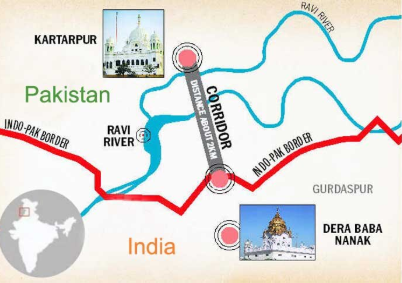 Recent incidents of URI, Pulwama attack and surgical & air strike by India had led to a complete breakdown of peace initiatives between the two nations. In such circumstances, soft power diplomacy can be a potent tool for bringing harmonious relations and peace between the two Nuclear Powers and Kartarpur corridor is a step in the right direction.

Challenges in Successful Implementation of Agreement

As the historical ‘connectivity’ of the subcontinent crumbled after Partition, it created massive a dysfunction in cultural ties and people to people relations. The Kartarpur Corridor provides an opportunity to restore the strained relations and pave the way for a wider constructive engagement between the two countries.