This article is based on “Strategic comfort’ with the Maldives” which was published in The Hindu on 09/11/2020. It talks about the relations between India and Maldives.

Maldives holds strategic importance for India under the Modi government’s ‘Neighbourhood First’ policy due to its location in the Indian Ocean. However, the relations between the two countries was strained under the pro-China regime of their former President Abdulla Yameen.

This can be reflected in the recent ‘India Out’ campaign led by Abdulla Yameen, against India’s massive developmental funding for creating physical, social and community infrastructure, and incumbent President Solih’s government retaining two India-gifted helicopters and their operational military personnel.

While India-Maldives relations have always been close, cordial and multi-dimensional, recent regime instability in the Maldives has posed some limitations, especially in the political & strategic arena . Therefore, the main challenge to India’s diplomacy is balancing out all these contradictions into harmonious relations.

Geo-Strategic Importance of Maldives to India

Despite being the smallest Asian country with a land area, Maldives is one of the world’s most geographically dispersed countries straddling a 960-km-long submarine ridge running north to south and which forms a wall in the middle of the Indian Ocean. Its strategic location defines the geo-strategic importance of Maldives far beyond its physical size, which can be reflected as the following:

In accordance with the “Neighbourhood First” policy of the government, India remains a committed development partner for a stable, prosperous and peaceful Maldives. However, for adherence of strategic comfort in relations, Maldives on its part should abide by its India First’ policy. 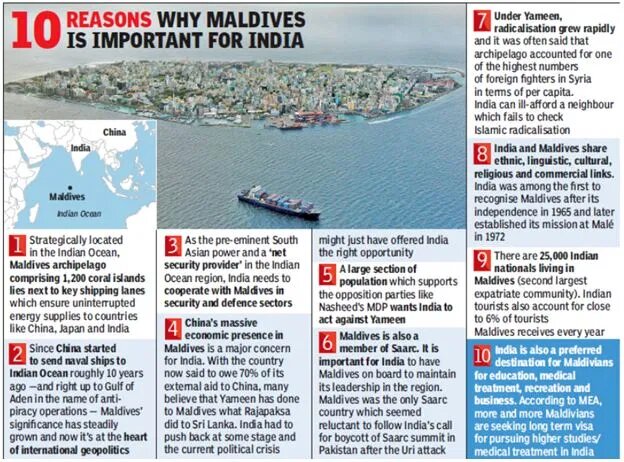 This editorial is based on “No fireworks: On NGT ban on sale and use of firecrackers” which was published in The Hindu on November 10th, 2020. Now watch this on our Youtube channel.