The article is based on “The Way Forward in Myanmar” which was published in ‘The Hindu’ on 05/02/2021. It talks about how the nascent democracy established in Myanmar is again overthrown by Military Junta and how India, the world’s largest democracy, is a stakeholder in the country’s internal issue.

Democracy is a form of government in which a substantial proportion of the citizenry participates in ruling the state and the representatives elected by the people run the country on their behalf.

However, this ideal statement is not being followed everywhere. Turning the attention to international affairs and diving deep into Myanmar, the military has once again taken over the country, declaring a year-long state of emergency and placing elected leaders under detention.

In this predicament, it is a tightrope walk for India. Being itself the world’s largest democracy, India has to back democracy in Myanmar but it must secure its security and developmental interests too.

The Myanmar military has grabbed power in a coup for the third time in the nation’s history since its independence (1948).

The Torturous Politics of Myanmar

Gist of the Issue 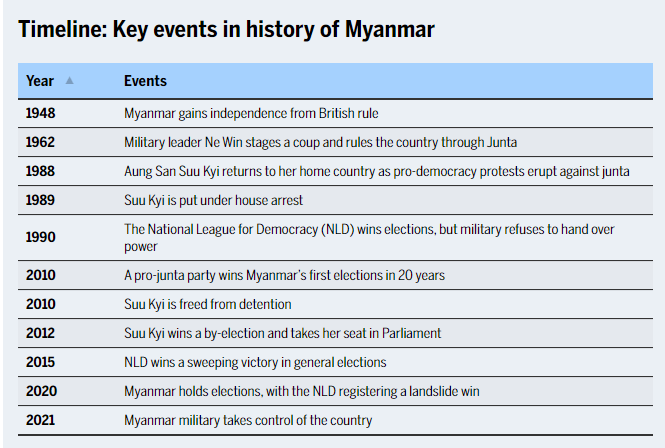 India as a Stakeholder

This editorial is based on “On The Upswing” which was published in The Indian Express on 29 January, 2021. Now watch this on our Youtube Channel.