This article is based on “Nagorno-Karabakh and India” which was published in Indian Express on 13/10/2020. It talks about the Armenia-Azerbaijan conflict and its impact on India.

Recently, a three decades-old unresolved ethno territorial conflict between Armenia and Azerbaijan over Nagorno-Karabakh flared up once again. The conflict is between two relatively small countries and is territorial in nature.

However, several regional and global players particularly Russia, Europe, Turkey and Iran are also involved to secure their strategic, security and economic interests in the region.

Further, the conflict may cause geopolitical unrest in the region which is already suffering from the Covid-19 pandemic.Therefore, regional powers must strive to find a diplomatic solution to the problem and prevent the clash turning into a full blown regional conflict. 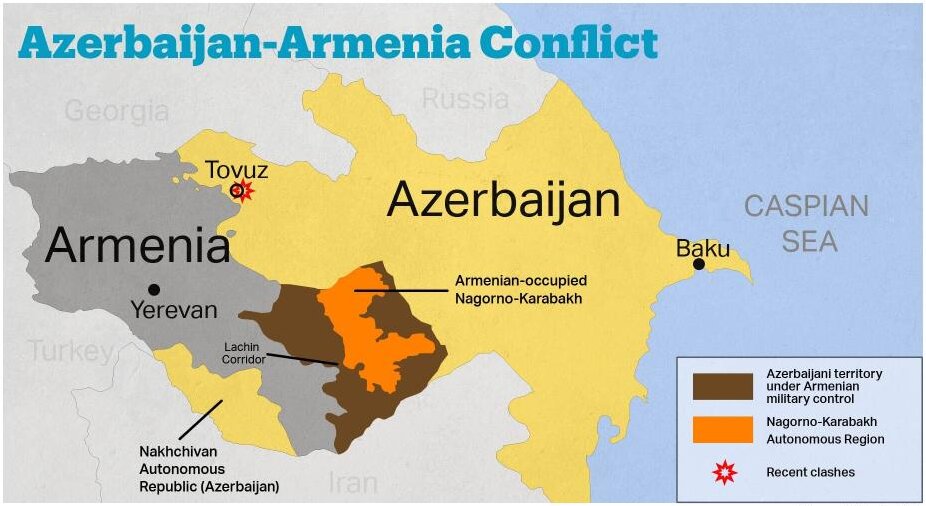 Genesis of the Conflict

Strategic Significance of The Region

Balancing Between The Two Extremes

Armenia-Azerbaijan conflicts reflect the failure of the Minsk Group of the Organization for Security and Co-operation in Europe (OSCE). In the absence of a peacekeeping force and the political will for peace, low-level frictions have persisted over the years.

Under these circumstances, India has done the right thing to adopt a balanced and neutral stance and pitching for a political solution as outlined in the Madrid Principles.

This editorial is based on “Talking peace” which was published in The Indian Express on October 12th, 2020. Now watch this on our Youtube channel.