This editorial analysis is based on the article A Case For Equality which was published in The Indian Express on 29th of August 2020. It analyses the Supreme Court Judgement on sub categorisation of the SCs/STs and different dimensions related to it.

A five-judge Constitution Bench of the Supreme Court has recently ruled that states can sub-classify the list of Scheduled Castes (SCs), Scheduled Tribes (STs), and Socially and Educationally Backward Classes (SEBCs), to provide preferential treatment to the especially deprived among them “to achieve the real purpose of reservation”.

The Supreme Court of India has thus reopened the legal debate on sub-categorisation of Scheduled Castes and Scheduled Tribes for reservations, or what is commonly referred to as “quota within quota” for SCs and STs. However, the court has referred the issue to a larger Bench to decide.

What was the case?

Why was the issue referred to a larger bench?

The Supreme Court of India in the landmark Mandal case had held that there was no constitutional bar on a state classifying SEBCs as backward and more backward. The constitutional goal of social transformation cannot be achieved without taking into account changing social realities. 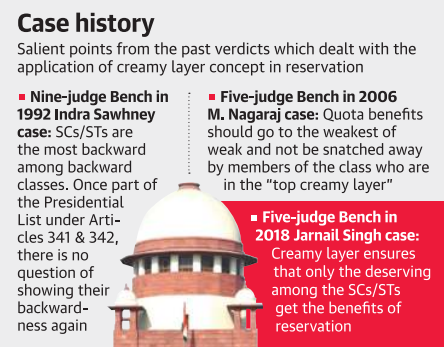 This editorial is based on “Testing Times” which was published in The Indian Express on August 28th, 2020. Now watch this on our Youtube channel.