This article is based on “On the Quad, define the idea, chart a path” which was published in The Hindu on 1/10/2020. It talks about the opportunity and issues related to Quad (an informal group of India, the US, Australia and Japan) for India.

Recently, it has been reported that the second Ministerial meeting of Quad countries will be held in Japan. Quadrilateral Security Dialogue (Quad) is the informal strategic dialogue between India, USA, Japan and Australia with a shared objective to support a “free, open and prosperous” Indo-Pacific region, that China seeks to threaten.

The manner of China’s dismissal of the Arbitral Award in the dispute with the Philippines on the South China Sea, militarisation of the islands in the region and individual conflicts with Quad countries have once again brought the four countries onto the same page and given a second chance to the Quad.

Engaging with Quad may serve two geo-strategic goals of India viz. countering China’s aggressive on border with India’s assertives in the maritime domain and emerge as a net security provider in the region. 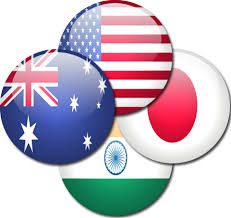 Opportunities for India Under Quad Arrangement

Emerging as a Net Security Provider

In order to secure national and regional interests, India should now focus on the maritime sphere also. In this context establishing a new division under the Ministry of External Affairs (MEA) to deal with the Indo-Pacific is a step in the right direction.

This editorial is based on “A costly pause” which was published in The Indian Express on September 30th, 2020. Now watch this on our Youtube channel.