This article is based on “Getting India back to the Afghan high table” which was published in The Hindu on 18/05/2020. It talks about the need to recalibrate India’s Afghan policy, as the Taliban takes the central role in Afghanistan politics.

Recently, the United Nations Secretariat held a meeting of the “6+2+1” group on regional efforts to support peace in Afghanistan. This group includes six neighbouring countries: China, Iran, Pakistan, Tajikistan, Turkmenistan and Uzbekistan; two global players the United States and Russia, and Afghanistan itself.

However, India has not been invited to this peace process. The reason given for keeping India out of this regional discussions is that India holds no “boundary” with Afghanistan. However, the “6+2+1” grouping ignored India’s stand that its territory borders Afghanistan (along Wakhan Corridor) and is currently under Pakistan’s illegal occupation.

Despite all the development work taken up by India in Afghanistan over the past 18 years since the Taliban were ousted from Kabul in 2001, it finds itself on the margins of international diplomacy in Afghanistan.

In this context, there is a need for India to recalibrate its Afghan policy, in order to secure its strategic and economic interest.

Due to the Taliban’s coming to power, India faces a dilemma, between:

In the current situation, it is essential for India to maintain its strong links with the Afghan government, build and support its traditional Afghan allies and open lines of communication with the Taliban. 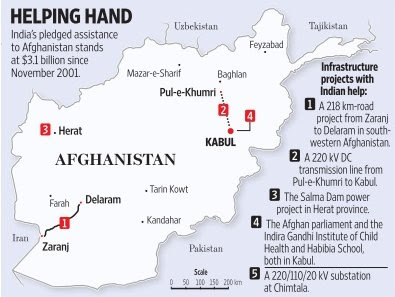 This editorial is based on “A Lending Hand” which was published on The Indian Express on May, 19th 2020. Now watch this on our Youtube channel.