For Mains: Bilateral Groupings & Agreements , Russia’s war over Ukraine,Impact of sanctions on Russia, SWIFT and its Significance.

Why in the News?

Recently, in a move to counter Russia’s war over Ukraine, the US and the European Commission issued a joint statement to exclude some Russian banks from the Society for Worldwide Interbank Financial Telecommunication (SWIFT) messaging system.

What is the SWIFT Messaging System?

What will be Impact on Russia?

How did Russia React?

What are Other Global Alternatives to SWIFT? 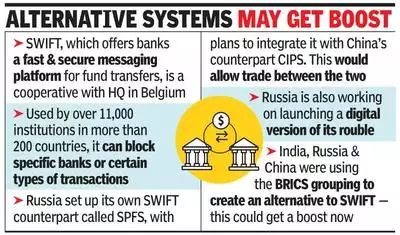 How will the Sanctions Impact India?