Rajasthan is a state in northern India with Jaipur as its capital. Most of it is covered with a huge proportion of desert, it also has some densely thick forests with a wide range of flora and fauna. Rajasthan's desert is also an enormous habitat for native animals and plants. With over 2000 plants, 87 mammals, 114 fish, 500 birds and 81 reptile species, the state is a home to rich biodiversity. 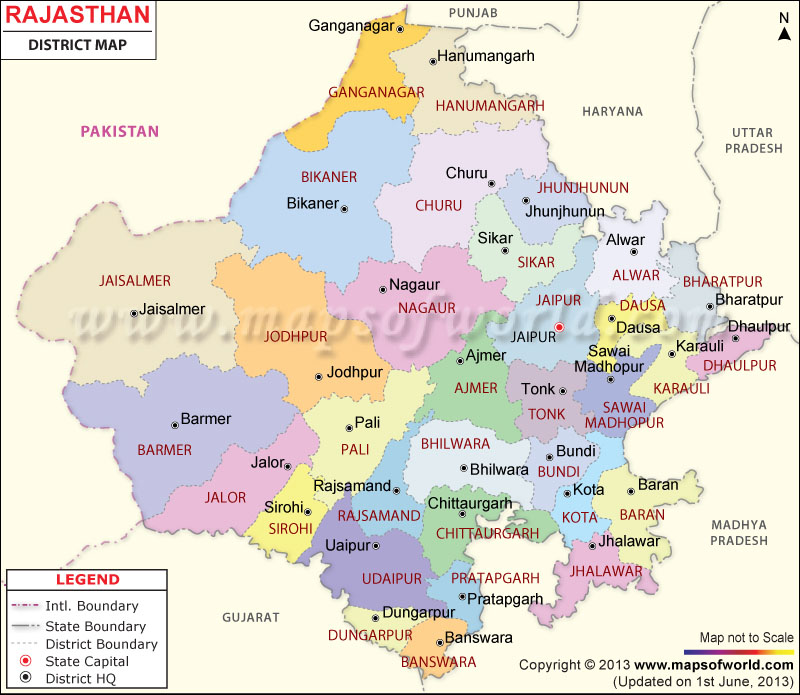 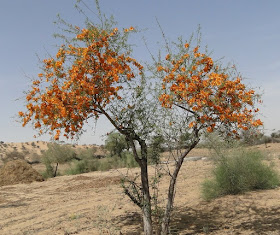 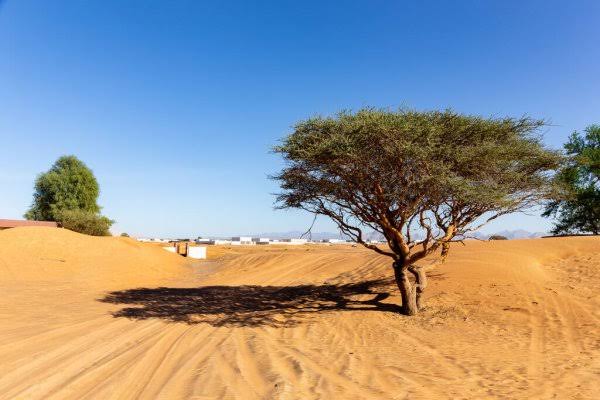 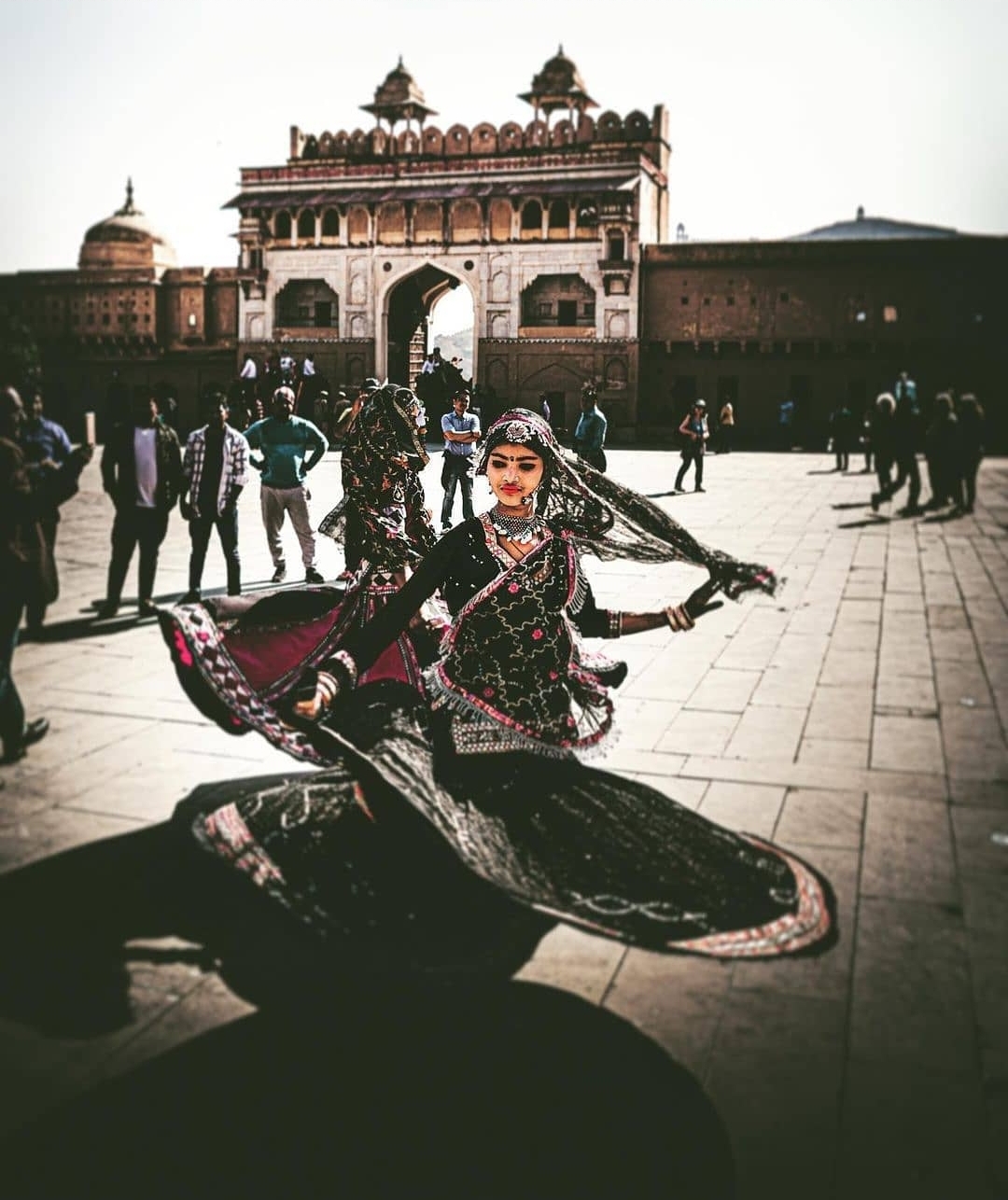 Apart from being rich in culture, Rajasthan's biodiversity is hugely diverse. Though most of the state is covered with desert, it has a large flora and fauna that is scattered all over the region. Each and every species present in the state has an interesting and important role to play. They all contribute to running the ecosystem as all of them directly or indirectly depend on each other. The vegetation, which is chiefly xerophytic and quite scarce, occurs in great variety. There are 682 plant and 390 animal species present in the Thar Desert. The rich floral and faunal composition of the state provides useful material for human consumption and contributes in forming a unique ecosystem.

The geographic features of Rajasthan include sandy plains in the west, the Aravalli Mountain range running south-west, the eastern plains and Hadoti plateau that covers southeast Rajasthan. 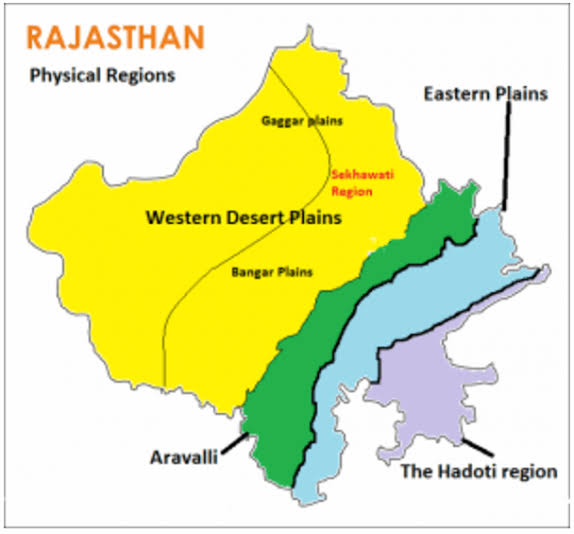 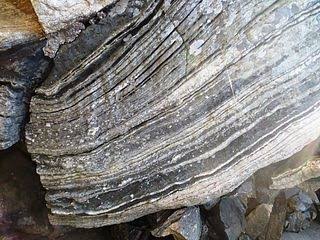 The widespread vegetation of Rajasthan is scrub jungle. Generally, the soil is sandy with grasses and shrubs. This is due to low rainfall and soil erosion. Alkalinity and salinity are the other features of the soil.

The northwestern region is generally sandy and dry, most of which is covered by the Thar Desert. The Thar Desert is thinly populated due to the arid conditions. Thorny scrub forests lie around the desert. Western Rajasthan has deserts with alkaline and saline soil. The vegetation here is scanty and mainly consists of thorny bushes and cactuses. Rabi crops are grown when the land is properly irrigated and Kharif crops are grown in the Monsoon season. Semi-arid regions have rivers and lakes that result in alluvial plains. Alluvial soil is fertile and enables extensive cultivation. The districts like Jaisalmer, Bikaner, Barmer, Jodhpur, Sirohi, Pali and Sikar belong to this area and have alkaline and saline soils with a calcareous base. The regions, mainly the district of Ganganagar flooded by the Ghaggar river seasonally, have alluvial soil. Hence, this area is fertile with dense vegetation and food crops like maize, wheat, mustard, fruits etc.

Districts including Jaipur and Ajmer are watered by Banas River and its tributaries. Thus, the fertile soil enhances the cultivation of crops like barley, gram and wheat. 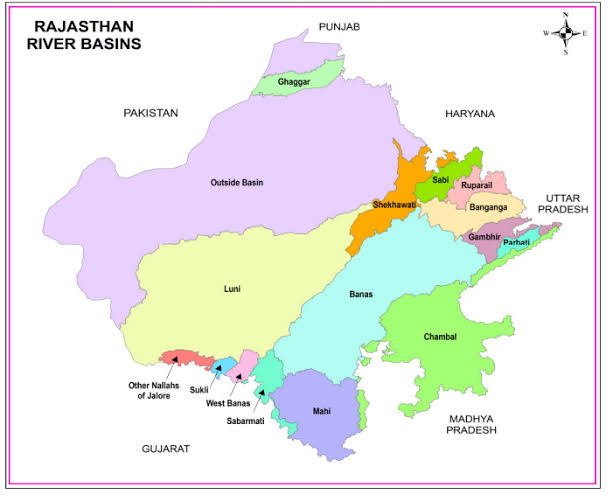 The Aravalli Range is more fertile and is home to dry deciduous forests and tropical dry broadleaf forests that include trees like Teak and Acacia. Black soil with lava deposits can also be found in the Aravalli region. Food crops and cash crops like cotton are grown here. Bhilwara district and major parts of Udaipur district, Chittaurgarh district and Sirohi district lie in this region.

The eastern plains are fertile with alluvial soil. Availability of water from rivers allows the region to be cultivated well. Flood-prone regions in the plains have loamy and clayey soil. The easternmost regions are drained by Chambal and Banas rivers. 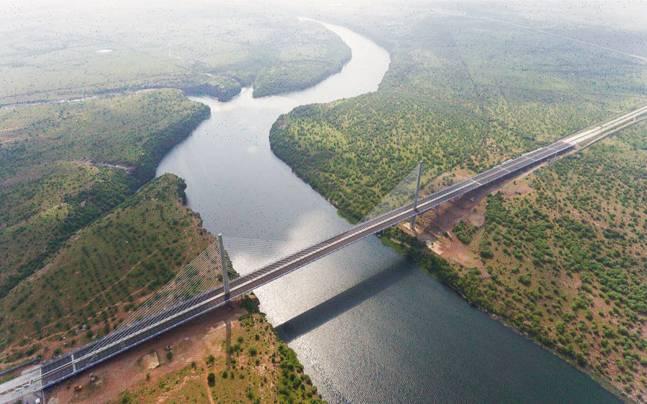 Hanging Bridge across the Chambal River in Kota

The Hadoti plateau, which includes the districts of Baran, Bundi, Jhalawar, Kota etc., has black soil. This region is fertile with the presence of the Chambal River and its distributaries. Crops like cotton, sugarcane and opium are grown here. Some districts of Rajasthan such as Dungarpur, Banswara, Udaipur, Bhilwara and Chittaurgarh have red and yellowish soils. They are made up of acidic rocks such as granite, gneiss, and schist. They develop in areas in which rainfall drains soluble minerals out from the ground.

Rajasthan's economy is basically agricultural and pastoral. Wheat and barley are the major crops that are cultivated over large areas. Pulses, sugarcane and oilseeds are also grown. Rajasthan is one of the largest producers of edible oils in India and the second-largest producer of oilseeds. Cash crops raised by farmers are cotton and tobacco. The state is also the biggest wool producer in the country. It is interesting to note that the main producer, as well as consumer of opium, is Rajasthan with 60% of the total production in India. (Wikipedia)

The main industries in the state are based on minerals, agriculture and textile. Rajasthan is the second-largest producer of polyester fibre in India. Quarrying and mining are also prominent here due to the presence of various minerals and rocks like granite. It is rich in deposits of salt, copper and zinc. 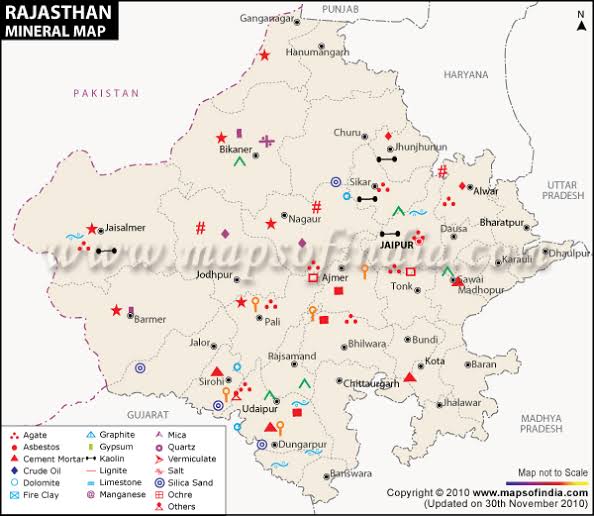 Rajasthan, though mostly dry, has a rich variety of flora and fauna. The natural and predominant vegetation of the state is Northern Desert Thorn Forest or scrub jungle. The western parts have typical arid-zone plants, such as tamarisk. Trees are scarce here and are limited mostly to small, scattered forest areas in the Aravallis and in the eastern part of the state. These forests occur in small clumps of thorny shrubs. The density of the vegetation increases depending upon the rainfall received. 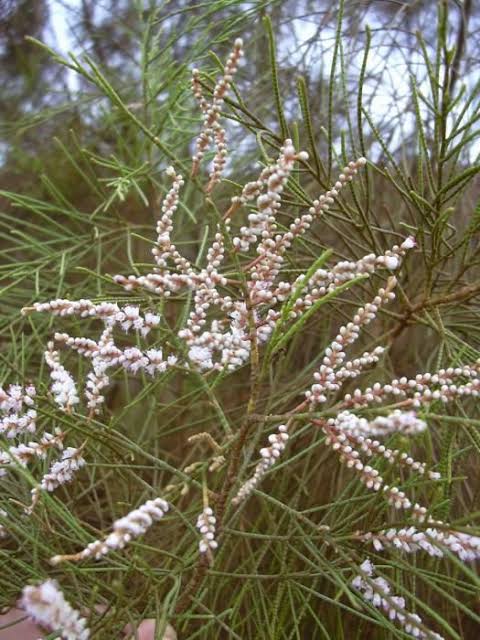 All parts of the state, except the western region, have forests. Western Rajasthan is arid in nature and thus devoid of any forest cover. Most of the forests spread through the hilly districts of Udaipur, Kota, Sirohi, Alwar etc. Other than the thorn forests and dry deciduous forests, Rajasthan has bamboo forests that spread through the districts of Chittorgarh, Udaipur, Kota and Abu. The sub-tropical hill forests are found in Sirohi. They consist of evergreen and semi-evergreen vegetation.

Some prominent species of trees found in Rajasthan are sacred fig, flame-of-the-forest, Indian plum, axlewood and date palm. Shrubs like hibiscus, scarlet bush, golden dewdrop and grass species like kheenp and sewan are abundant in the region. Rare species of wild roses, ferns and orchids are also seen here. 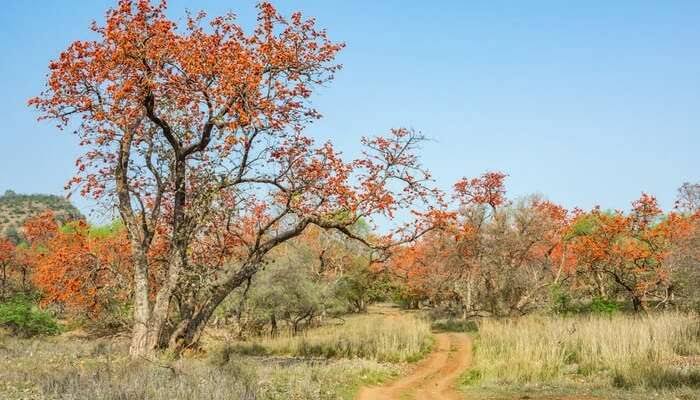 Flame of the forest

The most widely seen vegetation in Rajasthan is Jand, known as the king of the deserts, which thrives in arid regions. It is used as a vegetable and fodder. Another popular desert vegetable is karira. A variety of creepers, shrubs, bushes and cacti grow in abundance. Thorny plants are the peculiarity of the area. These thorns are actually dried-up leaves to prevent moisture loss in dry and arid conditions. 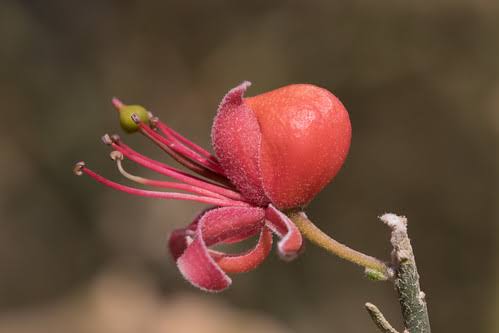 A variety of reptiles, mammals and birds can be found here. Frogs, toads, gharials, crocodiles, lizards, skinks and snakes are the various reptiles in Rajasthan. Camels, tigers, gazelles, antelopes, nilgai, leopards are some of the mammal species in the region. Hundreds of species of migratory birds also visit Rajasthan which includes Siberian Cranes, flamingos, pelicans and many others. More than 300 birds live here and peacocks, warblers, sparrows, ducks, and bulbuls are some of them.

The two major national parks in Rajasthan are Keoladeo National Park in Bharatpur district and Ranthambore National Park in Sawai Madhopur district. Keoladeo National Park, also known as Bharatpur Bird Sanctuary, was a royal game reserve. It protects about 400 species of migratory and resident birds. It is a wetland where migratory birds from Central Asia, from countries like Afghanistan, Turkmenistan, China and Siberia, gather before flying to other regions. The Park is the known wintering site of endangered Siberian Crane and threatened species such as the Greater Spotted Eagle and Imperial Eagle. Ranthambhore was also a game reserve and is a deciduous forest known for its large tiger population. 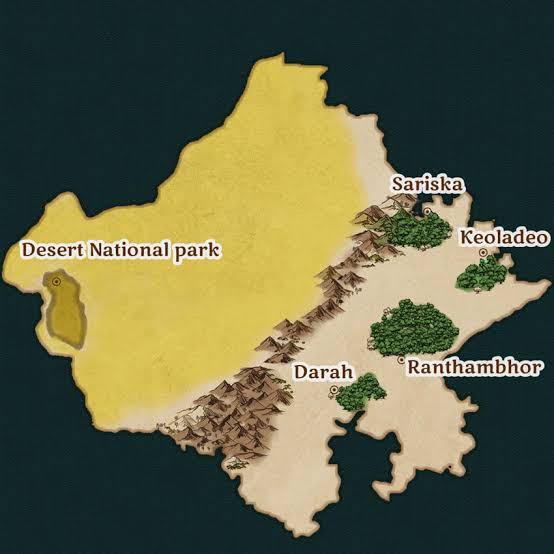 Most of Rajasthan's forests are restricted to its eastern and southern parts. The jungles are roughly allocated in several districts. Most of them are located over the hilly areas in Udaipur, Rajasamand, Kota, Baran Sawai Madhopur, Chittorgarh, Sirohi, Bundi, Alwar, Jhalawar and Banswara districts. These thick native forests are in unassailable natural plots, primarily restricted to different national parks and wildlife sanctuaries. The remaining forests of the state are in varying stages of development.

These forests are classified into 4 broad categories of forests.

Tropical thorn forests are based in arid and semi-arid areas of western Rajasthan. They expand from western Indo-Pak border to Aravalli hills and the south-eastern plateau. The main species found in this kind of forest are babul ,reonja, jand, karira etc. These forests are basically found in Jodhpur, Pali, Jalore, Barmer, Nagaur, etc. 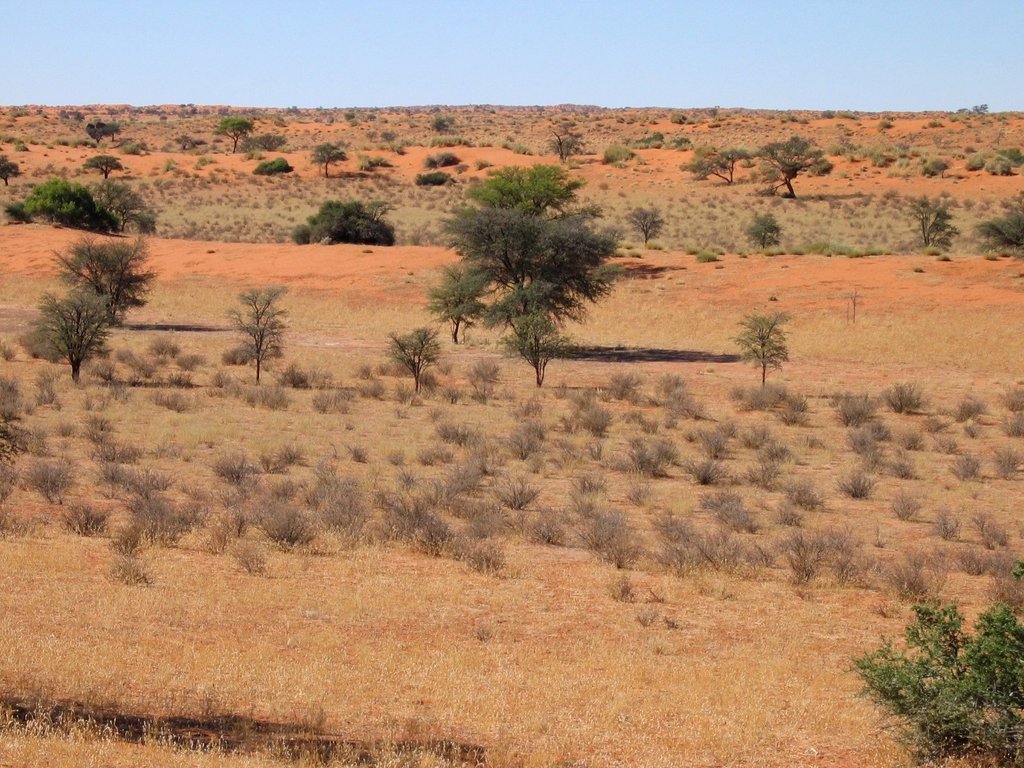 Found in small patches in a few parts of the state, they are located in northern and eastern slopes of Aravalli ranges in Alwar, Bharatpur and Dholpur districts. Erratic growth of distinct species of dry deciduous forests can be seen along the dry river beds of Jalore, Nagaur, Ganaganagar and Bikaner. Some of the species found in this kind of forest are axlewood, Bakhli, khair, crocodile bark tree, baheda, arjuna, oli-banum, bamboo etc. These forests are found in Sirohi district in Rajasthan, mostly on the hills bracing Mount Abu. There are species of semi-evergreen and some evergreen trees present in the forest. The vegetation of Mt. Abu comprises several plants which are identical to the sub - tropical region plants of Himalayas. They are present between 700 to 800 m altitudes around Mount Abu.

These forests are found in the southeastern and easten part of Rajasthan in the districts of Chittorgarh, Kota, Udaipur, Sirohi, Banswara, Dungarpur etc.

Rajasthan, as a state, is loaded with diversity with respect to its geographic attributes. It has deserts, mountains, flood plains, and heavy forests. From arid regions to fertile plains, scorched Jaisalmer to cool Mt Abu, it is a place packed with diverse landforms. Mostly known for dry deserts and extreme weather climates, this state houses a wide variety of vegetation and wildlife.

Though rich in biodiversity, there is a huge amount of flora and fauna that has either gone extinct or are on the verge of depletion. There are numerous organisations working to protect the biodiversity of Rajasthan to help the ecosystem stay stable and healthy.