The subject of political science has evolved by questioning the nature and importance of concepts like state, constitution, citizenship, laws, and governments.

Aristotle, famously referred to as the father of political science, had laid the bricks of the subject. In this blog, you will read about his understanding of the state, classification of constitutions and the cycle of governments.

The first man to distinguish between various branches of knowledge had been Aristotle. He differentiated between meteorology, poetics, logic, biology, ethics, natural history, aesthetics, physics, rhetoric, metaphysics and even wrote extensively on these subjects.

He did not only lay the foundation stone of political science but also contributed significantly to its elaboration as well. "Politics", "Ethics", and "Rhetoric" are few among many of his works that hold discussions on questions of law, equality, justice, etc.

In his book, The Nicomachean Ethics, Aristotle writes, "The supreme good... must be the object of the most authoritative of the sciences - some science which is a master craft. But such is manifestly the science of politics, for it is this that ordains which of the sciences are to exist in states, and what branches of knowledge the different classes of citizens are to learn, and up to what point."

His view demonstrates that political science dominates all other sciences. It explains his "Hierarchy of Ends", implying that each branch of knowledge is merely a means and would ultimately serve the end of leading a good life. Note here that Greek philosophers and their view of politics share one common notion. They believe that the state comes into existence for the sake of life and continues for the sake of good life. Aristotle doesn't differ on this notion and is hence considered to view the science of politics as supreme to other sciences.

Aristotle and his view on State

Any human being cannot survive in isolation, and thus, a man and a woman establish a household. A village is formed when a family expands itself, and when many such villages are formed, a state comes into existence. As and when a state is formed and society is organised, human beings can meet their needs.

It is for the same reason that the state's existence is as important and natural as the presence of a family or village. However, most human associations are flawed and help to fulfil one or a few facets of the good life, but that's untrue for a state. He viewed the state as being able to meet the whole or all facets of a good life.

It is important to understand why he perceived the state as natural for humans. According to him, there is no difference between an animal or a human being, other than the fact that a human being has the desire and a sense of living a good life. What it means is that human beings become different from animals only if they exist in a state. It is the same desire to lead a good life that makes the formation of a state a natural thing to occur.

Aristotle and his view on Man

Aristotle believes that Man is a political animal. This analogy is intriguing because it does not only consider man to be a social animal but also interprets him as a political being. Aristotle uses the same concept of the good life to justify his consideration of a man as a political being. He asserts that all kinds of living beings happen to exist in groups, and thus, they can be understood as social animals. However, it is solely the quality of human beings to aspire for a good and qualitative life.

For human beings, satisfaction doesn't cease at survival; the constant aspiration to lead a good life makes them political beings by default. He says, "he who does not live in a state or who does not need a state is either a beast or a god".

State and its relation with Man

Aristotle is known for his dictum that State is prior to man. Chronologically, it is a man who appears before the state. Still, since it is the state that makes human beings capable of completing their needs and fulfilling the objective of a good life, the state is given priority over the man.

To understand how the state is before man, O.P Gauba uses the example of whole and part. A leg or a hand is a part of the body, but a leg or a hand without a body is useless; an individual without a state is incomplete, and it is the state that makes him whole.

Aristotle draws a relation between organ and organism. Each organ of a living being performs a specific function; each individual performs different responsibilities in society. The body consists of different organs performing varied functions, and the body ensures harmony in its functioning. Similarly, the state ensures the communion of various individuals, where the division of labour ensures cooperation and harmony in society.

Aristotle and his classification of governments and constitutions

The case history of Athens is an important source to understand his classification of the constitutions. One can understand this fact based on two factors:

According to Aristotle, without any adequate checks on a ruler's power, no form of government would be stable. He believes that power and virtue cannot coexist.

He has provided the cycle of change of governments over time. Kingship, a normal form of government, turns to tyranny when there is an absence of control over the monarch's power. Tyranny leads to a rebellion or a revolution by a few individuals who establish an aristocracy. Aristocracy can deteriorate and turn into an oligarchy, the perverted form. With time, a greater many rebels against oligarchy and supersede it with polity. Polity further decays in democracy when the many rulers begin to seek their self-interest. In the end, a single individual who seems virtuous establishes a monarchy, and the progression of ideal form and perverted form continues in a circular motion. 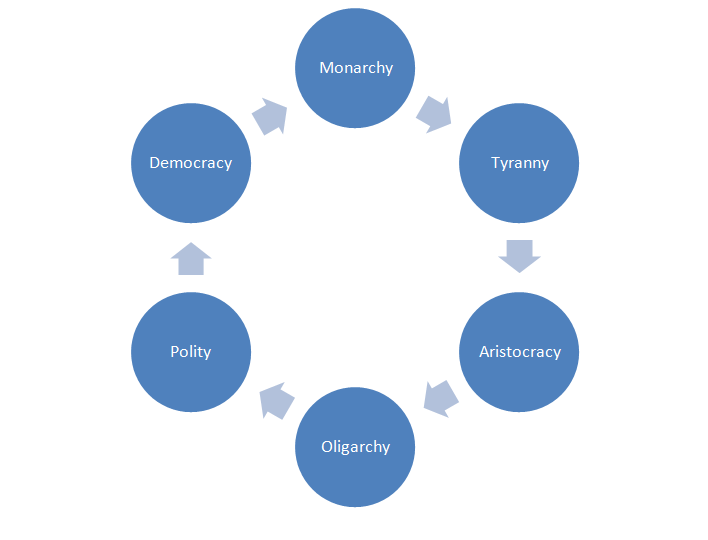 Aristotle gave the concept of a mixed constitution as a solution to prevent instability and establish a lasting form of government in the Greek city-state. He employed his idea of the "Golden Mean" to create stability. In his book "Ethics", he explains the Golden Mean as a middle path, which means that virtue lies between two extremes. Anything on an extreme end becomes a vice, and each virtue lies in the middle of the two extremes. For instance, courage is a virtue that lies between the two extremes of timidity and negligence.

His solution to bring a stable form of government is the combination of rule by few and rule by many. He discarded Monarchy because it would be corrupt from absolute power. Aristocracy would suit because few would make the rules. This would comprise the chosen minority who are educated and rich. However, in case of no checks on aristocracy, it would deteriorate. To prevent that, Aristotle suggests that the decisions made by the aristocracy should be ratified by the ordinary many. He says that "the people, though individually they may be worse judges than those who have special knowledge, are collectively as good".

Aristotle's suggestion of a judicious mixture between aristocracy and what is sometimes referred to as Polity or, at other times Democracy, embodies his belief in the Golden Mean formula. Hence, the competent, rich and educated would rule, but the ordinary citizens would check the aristocracy from exceeding their power by ratifying their decisions. In modern times, Aristotle's formula is arguably referred to as Constitutional Democracy.

Annie Pruthi is currently pursuing her masters in Political Science from JMI, New Delhi and is a first division Arts graduate from Delhi University. She is an avid reader and an award-winning best-selling author. Her book "Will You Stay?" recently won the title of "Most Promising Book, 2020 (Fiction)" in the Coimbatore Literary Awards.