This article is based on Enforcing contracts key to 'ease of business' which was published in The Hindu BusinessLine on 01/09/2021. It talks about the improving ease of doing business in India and the constraint still dragging it behind.

India needs investment of USD 4.5 trillion to build sustainable infrastructure by 2040. Thus, it is imperative to rapidly boost India’s global ranking in the World Bank’s Ease of Doing Business (EoDB) in order to attract foreign investment.

However, there are several challenges (especially Enforcing Contracts) which need to be resolved before we could break into the TOP 50 in the Worlds’ EoDB list.

Challenges With the Enforcement of Contracts

While India has consistently improved its score in EoDB, there is still a long way to go.

Also there is lately a shift of supply chains from China, it is important to focus on some of the issues that have prevented India from improving our contract enforcements. This is important to instil investor confidence as it signals predictability and commercial viability of the transactions. 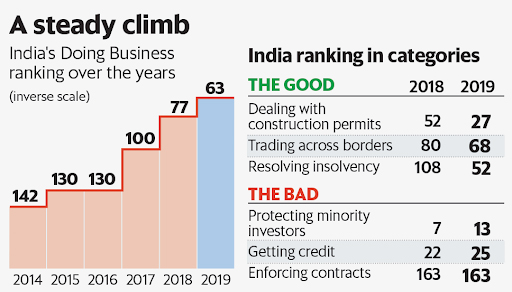