To understand the current realities of Russia and Ukraine, and the part NATO has played in defining the current hostilities between the two nations, it is important to rewind history and trace the developments that have happened since the 1990s. Most of the conflicts in the world have an extended history of various complexities and overlapping difficulties, the Ukraine-Russian crisis is no exception.

This blog will try to draw a rough picture of the background of two countries and their relationships with one another to attain an understanding of the current Ukraine-Russia situation. The attempt would also be to address the history of US-backed NATO and how it has been a major factor in today's hostility.

Today's known Russia was once a part of a huge empire, known as the Soviet Union or USSR. The Soviet Union was a federation of various communist republics that followed the ideology of Marxism-Leninism. The USSR was the largest country in the world, constituting multiple nations. It was a federal union with Moscow as the capital.

The Soviet Union was formed after the Russian Revolution of 1917 when Vladimir Lenin of the Bolshevik Party overthrew the Romanovs. Fast forward to the second world war, USSR was a major superpower in the world. The centrally planned economy with rapid industrialisation allowed the USSR to attain dominance in Eastern Europe. However, in the winter of 1991, the Soviet Union disintegrated into fifteen independent countries. Russia was the most powerful among them, and Ukraine was the second most powerful among the rest of the republics.

According to the Arms Control Association*, at the time of Ukraine's independence, Ukraine had the third-largest nuclear arsenal in the entire world. It had 1900 strategic warheads, 176 intercontinental ballistic missiles (ICBMs), and 44 strategic bombers. In 1994, Ukraine signed the Budapest Memorandum in exchange for a guarantee by Moscow to respect Ukraine's independence. It returned all the nuclear warheads by 1996 to Russia in return for economic aid and security.

Viktor Yanukovych was the president of Ukraine in 2013 and was accused of being Pro-Russia in his foreign policy. This was in the context of his rejection of an EU trade deal that would have allowed Ukraine to acquire a greater integration with the European Union but instead, he preferred to take $15 Billion from Russia. This was perceived as a sell-out to Moscow by the Ukrainians who wished for a pro-Europe policy. Protests broke out in the demand for signing the EU deal and in 2014, Yanukovych had to step down. In contrast, Volodymyr Zelensky, the current President of Ukraine is not only pro-Europe but is also a vocal critic of Russia's attempt to occupy Eastern Ukraine.

At this point, it is important to know that Ukraine is a multi-ethnic nation, with Russians (17.3%) as a minority ethnic group and Ukrainians (77.8%) constituting the major ethnic group. Not everyone was happy with Yanukovych's government being toppled. The minority of Ukraine, Russian speaking Ukrainians were not pleased.

If one compares the military strength of Ukraine and Russia, it is quite obvious that Russia transcends Ukraine's military power. According to Global Firepower** which provides analytical data and reliable statistics of a country's modern military powers, Russia is ranked 2 of 142 countries and Ukraine is ranked at 22 out of 140 nations. The defence budget of Ukraine is quite minor (ranked 20) with purchasing power ranked at 38 in comparison to the massive defence budget of Russia (ranked 3) with purchasing power ranked 6.

Once the second world war ended, the Cold War emerged between the two superpowers namely the United States of America and the Union of Soviet Socialist Republics in 1947. The cold war was constituted of various phases and various military pacts and alliances were formed by both the superpowers as a way to outdo each other and assert the dominance of their blocs.

A major feature of the cold war was thus the strengthening of military alliances. In the year 1949, the USA took the lead in forming a treaty with the countries of Western Europe called the North Atlantic Treaty Organisation (NATO). As a retaliation to the formation of NATO, the USSR initiated a similar treaty between the communist states known as the Warsaw Pact in 1955.

NATO's purpose could be inferred from understanding Article V of the North Atlantic Treaty. It states "the parties agree that an armed attack against one or more of them in Europe or North America shall be considered an attack against them all". It further stated, "Consequently they agree that, if such an armed attack occurs, each of them, in the exercise of the right of individual or collective self-defence recognised by Article 51 of the Charter of the United Nations, will assist the Party or Parties so attacked by taking forthwith, individually and in concert with the other Parties, such action as it deems necessary, including the use of armed force, to restore and maintain the security of the North Atlantic area".

As stated earlier, the birth of NATO was embedded in the broader context of the Cold War. It was presumed that NATO would either be disbanded or perhaps, lose its relevance after the Soviet Union's dissolution. This assumption relied on the point that the existence of NATO was based on its purpose to contain the Soviet Union's expansion.

On the contrary, the dissolution of the USSR did not lead to NATO's demise, rather it acted as a catalyst to its expansion. Another contributing factor to NATO's expansion was possibly the new picture of world politics where the USA emerged as the sole superpower. Many states of the former Warsaw Pact were enthusiastic to join NATO and were taken into its fold. In 1999, the Czech Republic, Poland and Hungary became its members. Further, in 2004, seven more countries namely, Bulgaria, Estonia, Latvia, Lithuania, Romania, Slovakia, Slovenia became its member states. The expansion continued with Albania and Croatia becoming its members in 2009, and Montenegro in 2017. Most recently, North Macedonia became its youngest member in 2020. NATO: The Bone Of Contention

The enlargement of NATO is evident from its increase in the number of member states. The rumours of NATO's further expansion through Georgia in 2008 and Ukraine in 2014 made Russia sceptical and is seen as an offence by Moscow.

However, Russia has never approved of NATO's expansion and essentially saw it as a threat. Vladimir Putin has asserted it clearly in his words - "For us, it is mandatory to ensure Ukraine never, ever becomes a member of NATO." Russia has further demanded that NATO should restore itself to its original pre-1997 military status in the region of Europe. In translation, it would mean that NATO should recede from expansion.

The larger picture is that Putin sees the expansion of NATO as a threat since it's an expression of the USA's hegemony. Of course, no nation would aspire to be surrounded by the nuclear arsenals of an erstwhile rival. At the same time, Russia has forgotten to respect the sovereignty of an independent nation and breached international law. The cold war might be considered by some as a chapter in history, however, the reality of global politics in the present day seems like a continuity of the past, or at least its revival.

It would not be entirely true to state that NATO is the only factor that has shaped today's global news. Factors such as the domestic politics of both Russia and Ukraine also play a considerable role. In this scenario, while Putin aspires to restore the erstwhile image of Russia as a superpower and use the language of nationalism at home to gain legitimacy for the attacks, Ukraine's ethnicity is largely divided and provides options to the Russian leadership to invade. The division between the west-residents of Ukraine who speak Ukrainian (majority group) and favour a pro-West foreign policy and Russian speaking natives in the east of Ukraine who wish to remain connected to Russia (minority group) also speaks to us about the domestic aspirations. 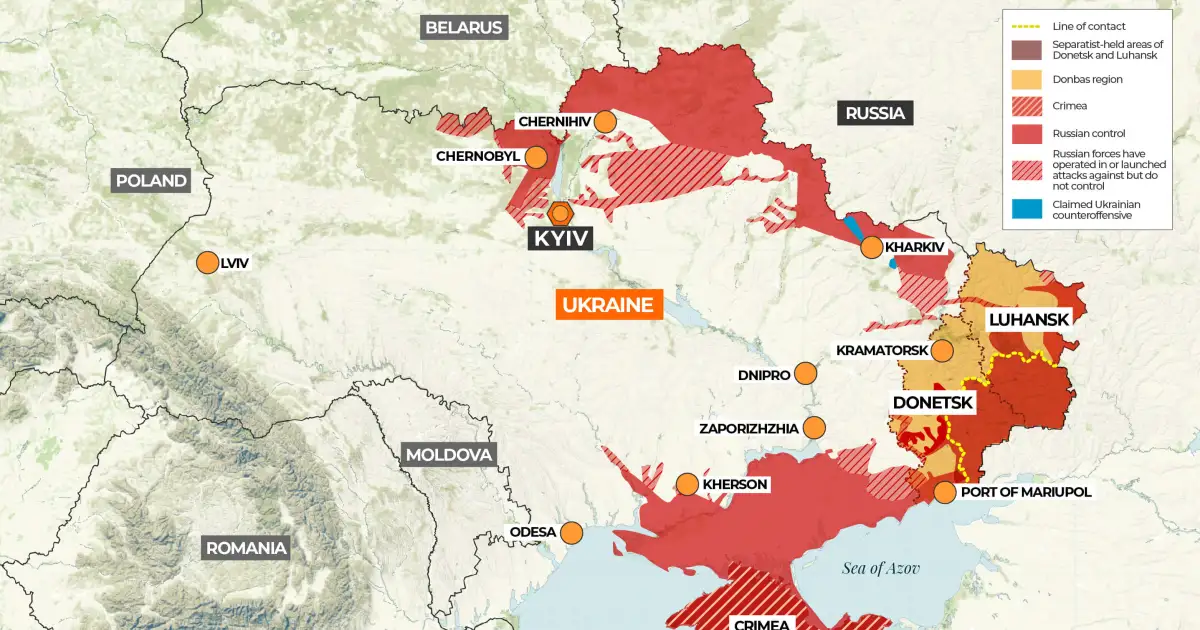 The Ukraine-Russian conflict has a complex history and many layers of intricacies that require excruciating analysis to understand the current headlines while NATO's expansion eastwards is the heart of the ongoing Ukraine-Russia War. The present-day realities of international politics run deep in the history and ideologies of the two nations, and it requires us to look closer to have a clearer picture.

Annie Pruthi is currently pursuing her masters in Political Science from JMI, New Delhi and is a first division Arts graduate from Delhi University. She is an avid reader and an award-winning best-selling author. Her book "Will You Stay?" recently won the title of "Most Promising Book, 2020 (Fiction)" in the Coimbatore Literary Awards.