Colva is one of the heavenly places present in India. It is a beach located in the Salcete village of South Goa. Colva is known for a lot of things including food, pubs, bars and beaches. The buildings in the area reflect the Portuguese style of architecture. The Union Ministry has taken Colva beach under the “Iconic Tourist Sites Development Project”. Through this initiative, the government plans to work on the infrastructure and tourism in the area and make it a better place for visitors.

This beautiful coast includes 4 villages- Colva, Vanelim, Gandaulim, and Sernabatim. Initially, these 4 villages were under the jurisdiction of the panchayat. Their duties included everything from collecting the revenue, issuing the trade licence to taking care of the overall development that takes place in the area. Colva was loved by the Portuguese, hence they would come and visit this place every now and then. They believed that this place offers them relaxation. Today, this area is covered with buildings and villas. Every weekend, we can see a huge crowd coming to enjoy the sunset. The beach sees its peak in October when people in large numbers come and visit the famous church – Colva church, which was founded by the Roiz family in the year 1630. 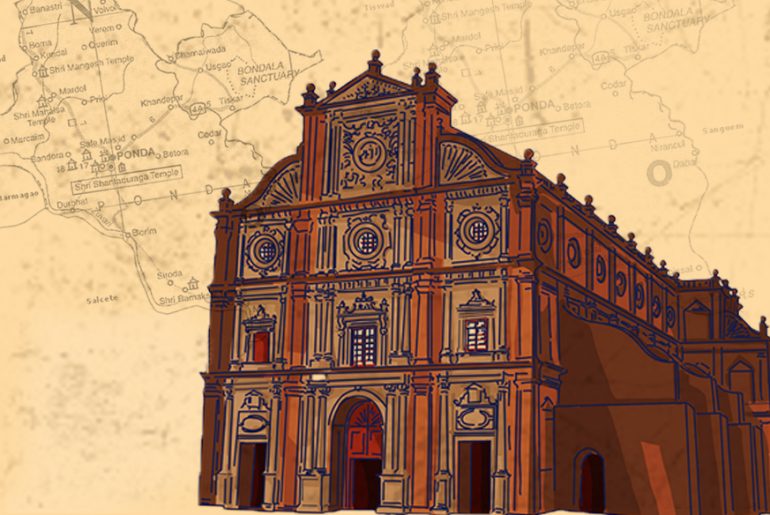 Colva is more serene and calm than the other beaches in North Goa. The total stretch of Colva beach is around 2.4 km. A part of the beach has white sand powder that can be seen along the shore. The seashore is also home to beautiful coconut and palm trees that extend up to Bogmalo beach in the North and towards Cabo de Rama in the south. The tourist industry in Colva is well equipped and offers great restaurants and hotels for people coming from all over the world. Guest-houses, shacks, restaurants and pubs, everything can be found around the area. Lifeguards can always be seen around the beach. It is also one of the longest beaches in Goa.

Colva was a vast barren land with a beautiful view of the Arabian Sea around it. Later, some people from the fishing community, also known as Harim, inhabited the region and ultimately settled there. The Mughal empire built a lot of forts and defences around, which made it difficult for people to settle there. Later, the Portuguese came and settled on this barren land, making it one of the most famous places in Goa today.

During the 18th century, one of the ascendants of Diogo instructed the people of Colva to plant coconut trees to increase the productivity, security and value of the land. Diogo Rodrigues is now known as the Lord of Colva. He was the one behind the architecture of Colva and who initiated all the work in 1551. His idea was a pure reflection of Portuguese culture in Colva. The houses were built in a manner that did not face the sea to avoid any attack from the enemy. Today, we can see the entire coastline flooded with coconut trees.

The local language of Colva is Saxtii. It is a Konkani dialect, which was originally spoken by Indo-European people. Colva has a majority of Roman Catholics along with Hindus and Muslims. The famous Mangueshi/Mangeshi temple shows how slowly and steadily the Hindu population is expanding in Colva. Along with this, the people are also influenced by a Hindu God called Saraswat Brahmin. One can witness a rich amalgamation of different cultures in the region. Nevertheless, the majority belongs to Christians and is slowly progressing towards a Hindu populace. There is a healthy community set up in the region and respect for all cultures can be seen clearly. Most of the cuisines of Colva are have Portuguese influence. However, the staple diet of Colva is fish and rice which is by far the most common and loved dish. Coconut oil is also very common in the Colva region, it is used in most dishes. There are several seafood delicacies loved by the locals of Colva. These include – shark, pomfret, tuna and many more. The most popular and loved beverage in Colva is the feni. 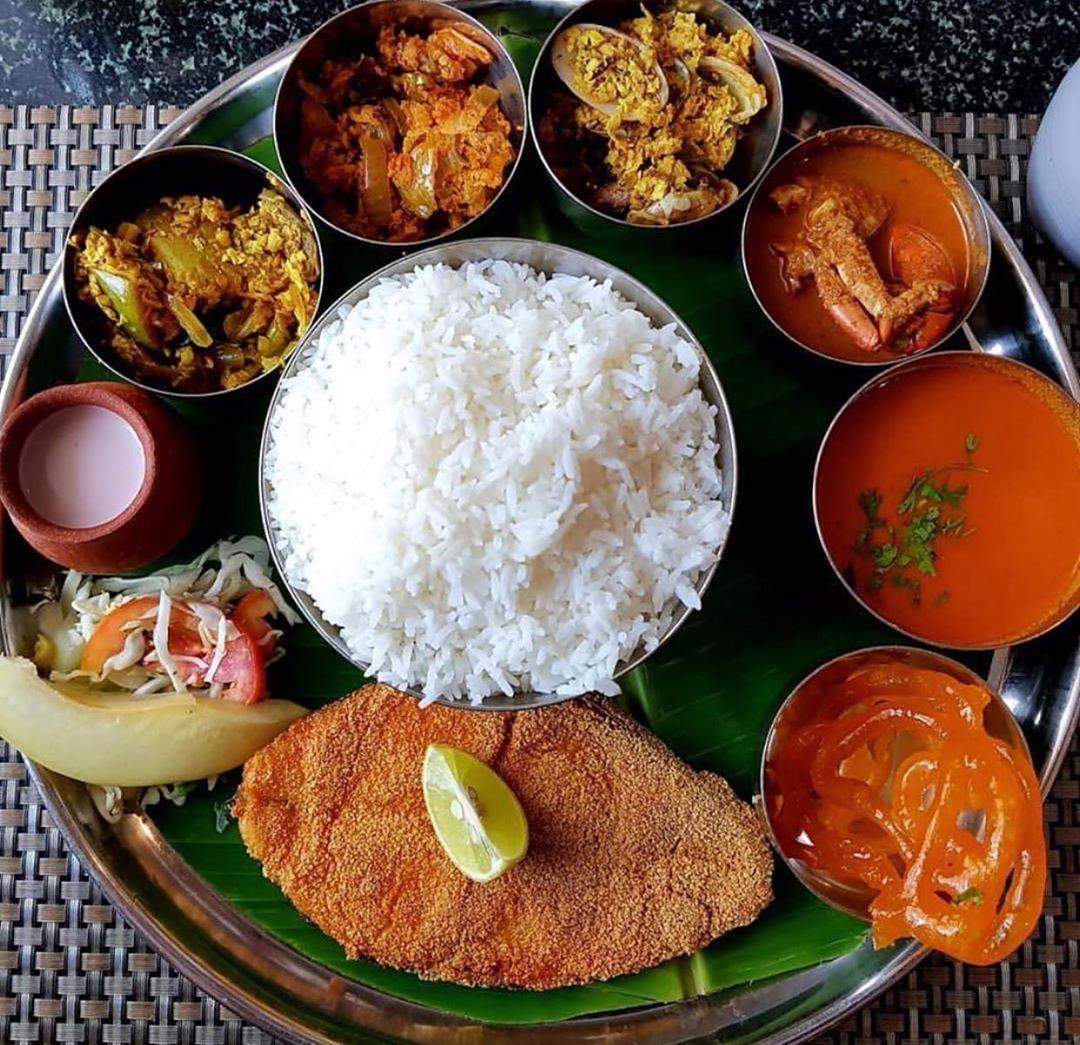 The ethnicity of Colva mainly comprises fishermen and farmers. Commonly known as kharvis, these fishermen use traditional Rampons, which is a net that helps catch fish. The fish market of Goa is indeed one of the most famous fish markets in India. There are approximately 10545 marine fishermen in Goa. It is one of the most remarkable markets that has earned a lot of profit for the state and its small regions like Colva. Various kinds of boats have also been designed for legal marine fishing. Since the amount of land is less, farming is done on a limited basis. The principal crop of the region is paddy or rice. 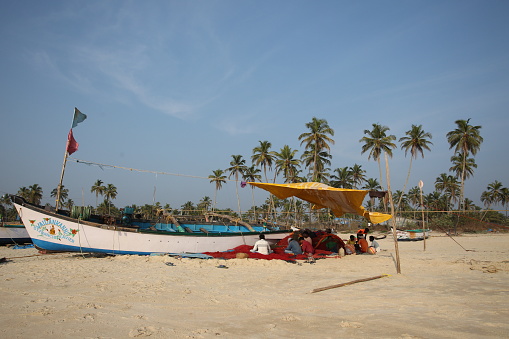 There are three prominent beaches in Colva. The first one is Colva beach which is the most famous beach in the land of Colva. The second beach is Sunset beach, which is also known as Betalbatim. This beach is less crowded and comes under the hidden gems of Colva. The third beach is Baywatch beach with glistening waters and a serene locale.

The closest railway station to Colva is Margao. Being in a tropical area, and also near the Arabian Sea, this place is usually hot and humid throughout the year, with May being the hottest. Colva beach sees a very short span of winters, and that is between December and February. 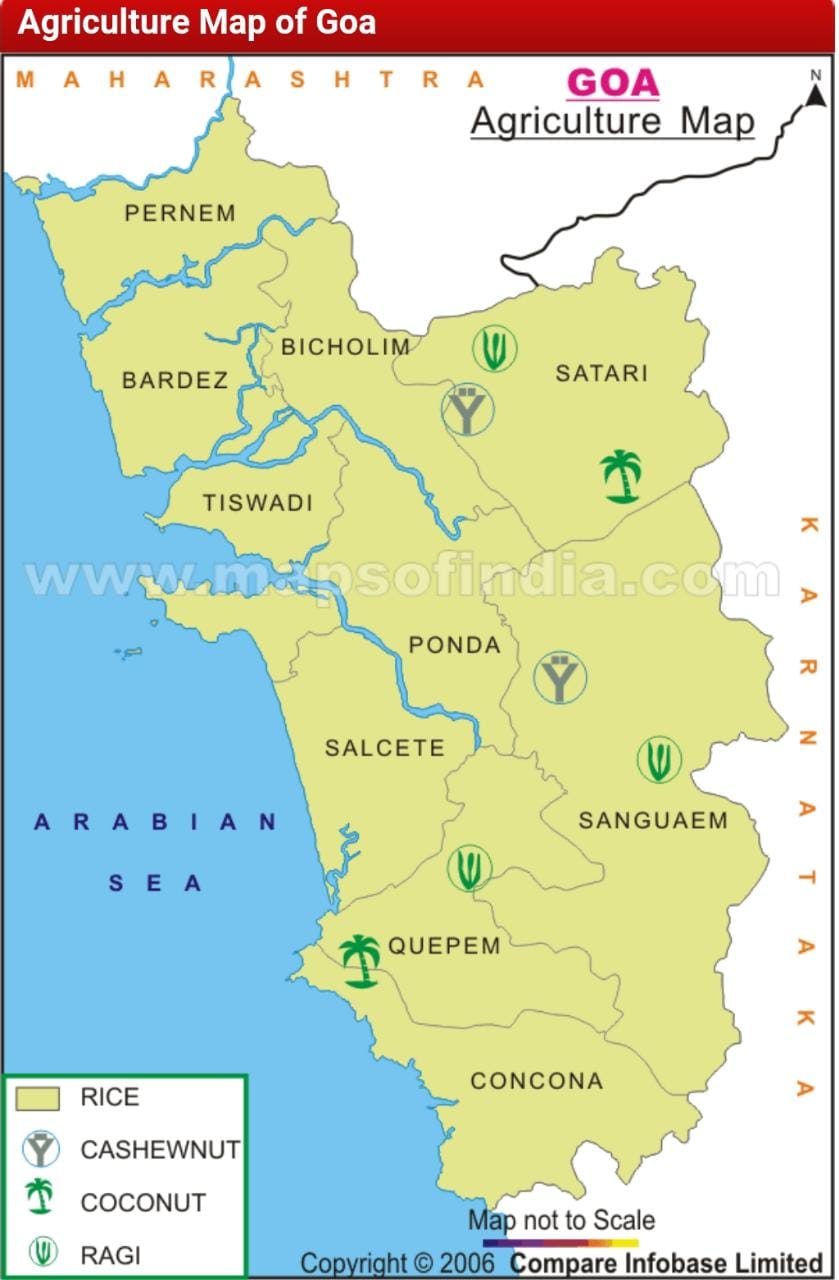 According to legends, Goa was created by Parashurama, who was an incarnation of Lord Vishnu. Parshuram won the war against the Kshatriyas and later, they were allowed to live on this land. That is when Goa came into existence. For a very long time, Hindu dynasties ruled the land of Goa. It was in the year 1312 when Muslims came to rule for a very short time. Later, in the year 1524, the famous Vasco da Gama reached Goa via the Cape of Good Hope. He was the first European to reach via this route. Later, more Portuguese came to Goa and it started to develop as a Portuguese state in India. But in 1961 the Indian army brought Goa under their control making sure that all the Portuguese had left the town. However, we can still see the Portuguese influence in some Goan areas. The people of Goa never wanted to be a part of Maharashtra, and hence, they demanded a different state. And, in the year 1987, Goa became the 25th state of our country. Goa is the smallest state in India but when it comes to tourism and fishing, Goa plays a major role in our economy. 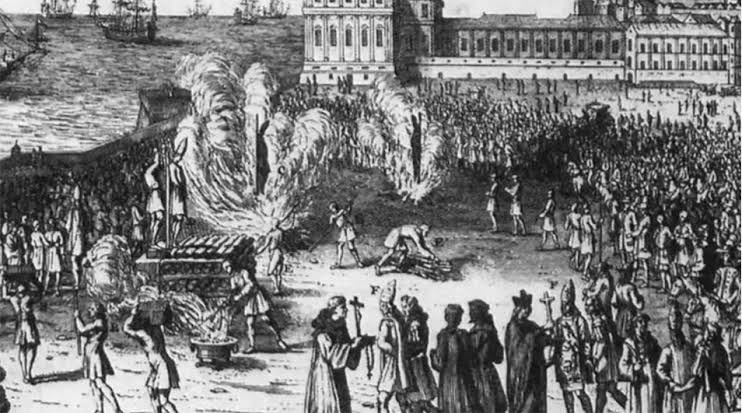 If you are looking for a place where you just want to relax then head towards Varca beach in Colva. Delve into the beauty of this rejuvenating beach. You can easily take a walk along the beach, relax as you see the sun setting into the Arabian sea. This beach is known to be one of the best beaches in Colva.

If you are looking for a place that is slightly offbeat around Colva, there is nothing that can beat the beauty of the Chitra Museum. This museum has a collection of artefacts that are close to 4000 and this museum is all about the agricultural tradition of Goa. This museum houses everything that shows the lifestyle of Goa, the antiques that have been a part of the Goan culture. The tourists are transported to a different place altogether when they step into the museum. 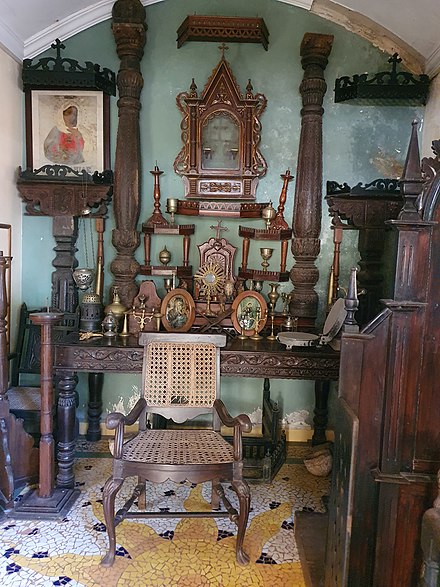 3. Church of Our Lady of Mercy

Sightseeing remains incomplete if this church is not on the list of best places to visit in Goa. The church is known for a renowned event called “Fama O Menino Jesus”. This is an annual event that is celebrated on the 3rd Monday of October every year. Thousands of people visit this church every year for this annual celebration. It seems like other churches but has a great history associated with it. This church was built in the year 1630 by the Bishop Governor. It was rebuilt in the 18th century. This church houses Baby Jesus and people believe that it has healing powers. 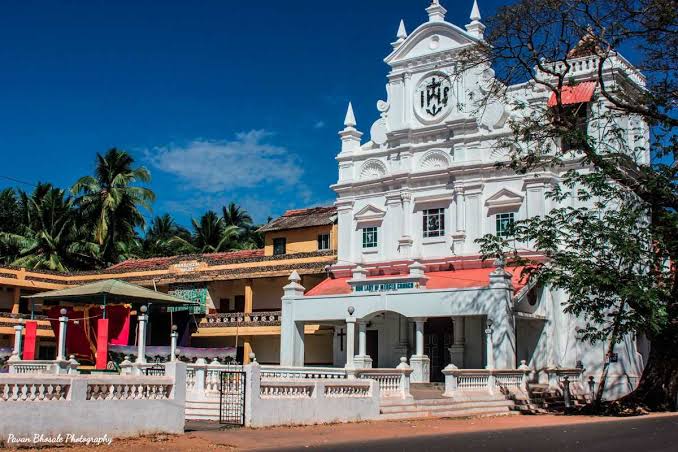 This beautiful four-tiered waterfall has been titled as the “Sea of Milk”, making it one of the most beautiful places to visit near Colva. Located on the Mandovi river within Mollem National Park, the waterfall is just a train ride away. The nearest railway station is Dudhsagar railway station. For people who love to trek, this place is a must-go. The beautiful sight of the waterfalls will calm your senses, making you never want to leave this place. 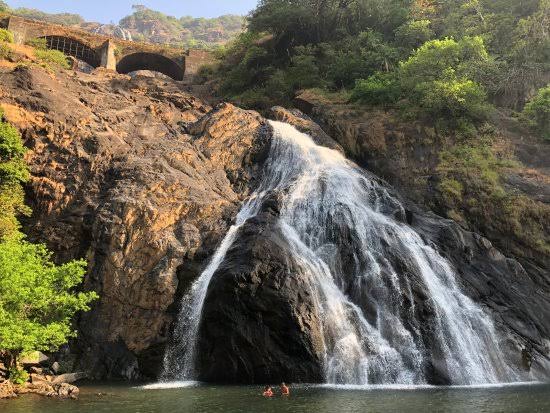 The beaches of Colva are known to be the most visited ones. However, we can see that the entire stretch that is housed with beautiful coconut trees has not been maintained properly. However, a similar situation can also be seen in the Northside of Goa. In order to take care of this entire situation, the Union Ministry has decided to come up with an initiative that will help develop Colva as an iconic tourist site in the state of Goa. Colva beach is the only beach, among other 11 places that will be a part of this initiative, making it a proud moment for the people of Goa. The various factors that were taken into consideration included - the footfall of the area, how famous the area is and how well the area is connected for tourists.

Goa is surrounded by beaches only from the north to the south, but Colva is the only beach that has been selected for this project. The Union Ministry also hopes that the people living in the region of Colva will come together and support the government to make it a successful initiative. Rashmi Verma, who is also the secretary of the Union Tourism Ministry, also said that they will draw up a well-thought master plan for the region of Colva. This plan will help in achieving their goal of making Colva beach an iconic tourist site in India.

Another initiative that has been taken by the Goa State Biodiversity Board invited tenders for agencies to conduct an assessment of the Colva beach. This study is about gathering data on the flora and fauna of the beach. This data also involves data on endangered species. A detailed study will be carried out that will help assess the change in the hydrodynamics of the biodiversity of Colva beach. This study will also be about the right use of the land from the beach and see how it will impact the environment and the surroundings. Furthermore, the study will also provide solutions addressing the drawbacks to make the land better.