Dr. B. R. Ambedkar, better known as Babasaheb, was an eminent jurist, economist, civil rights leader, politician, and writer. He served as the Chairperson of the Drafting Committee of the Constituent Assembly and played a major role in shaping the Indian Constitution, hence he is referred to as the ‘Father of the Constitution’. He also played a great role in gaining India's independence and later served the country as its Minister of Law and Justice. He was a staunch supporter of equality and worked towards abolishing untouchability by being the face of the Dalit movement in India. 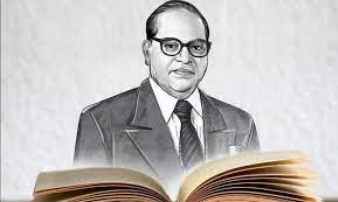 Dr. Bhimrao Ramji Ambedkar was born into a Dalit Mahar family in Central Provinces (today’s Madhya Pradesh). During childhood, he was discriminated against by his fellow students, since he belonged to a ‘lower caste’. He was offered scholarships by the ruler of Baroda and he studied in various universities in foreign countries. After Ambedkar finished his studies, he was appointed the Defence Secretary by the ruler of Baroda, where he was yet again seen as an untouchable. As a result, he quit the job and took up legal practice while also teaching. He wrote extensively about the lives of the ‘untouchables’ and brought in representation for this section of the society, which had remained marginalised for centuries.

While Dr. Ambedkar did play a role in the Indian National movement, his primary aim was to ensure that the lives of Dalits were made better. Consequently, he had many conflicts with the Indian National Congress. Ambedkar, unlike most other leaders of the freedom struggle, did not try to persuade the British to leave the country. Instead he led many Dalit movements and ensured there were policies in place for the Dalits. The most prominent of his efforts include his recommendations towards the Government of India Act of 1919, the Poona Pact with Mahatma Gandhi, and the setting up of the Scheduled Castes Federation Party.

Ambedkar was the Chairperson of the Drafting Committee of the Constituent Assembly and is inarguably one of the most prominent makers of the Indian Constitution. He ensured there were safeguards for people belonging to the downtrodden sections of society. Ambedkar played a key role in ensuring that people were granted many civil liberties including the right against exploitation as well as the freedom of religion. The Hindu Code Bill became a reality only because of his persistent efforts. Ambedkar’s legacy can be seen in the Directive Principles of State Policy (DPSP), the Right to Equality, reservations for historically marginalised communities, as well as the National Commissions for Scheduled Castes (NCSC) and Scheduled Tribes (NCST).

Ambedkar’s scholarship in various disciplines made him a part of various committees of the Constituent Assembly. He was a constitutionalist who read through the constitutions of 60 different countries while working on the Indian constitution. His debates during the sessions of the Constituent Assembly are proof of his invaluable knowledge. Besides this, Ambedkar played a major role in the formation of the Reserve Bank of India, through his recommendations to the Hilton Young Commission. He also served independent India as its first Law Minister. 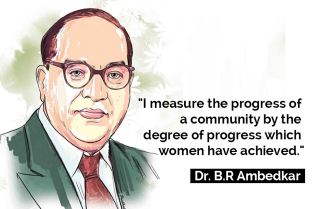 Ambedkar fought for the rights of the downtrodden and played a major role in mobilising them. It was because of him that many people belonging to the ‘lower caste’ began demanding their rights. He always tried to ensure that the historically unprivileged sections of the country got representation at various institutions. He also worked for their education as well as economic development. Ambedkar, by the means of journals such as Bahishkrit Bharat (literally, Ostracized India), Equality Janta, and Mooknayak (Leader of the Dumb), advanced the betterment of the lives of Dalits. He also founded the Bahishkrit Hitakarini Sabha which advocated for the development of Dalits.

Ambedkar led a movement against untouchability in 1927. Here, he criticised Hindu religious texts for their propagation of untouchability. He worked to ensure the ‘untouchables’ were allowed to enter religious places as well as draw water from public wells. He also led many Dalits to burn copies of Manusmriti, which justifies caste-based discrimination and untouchability, on 25 December 1927. Besides all these, Ambedkar signed the Poona Pact with Mahatma Gandhi in 1932, facilitating the reservation of seats for Dalits (then known as Depressed Classes). Earlier in 1930, he had led around 15000 Dalits to enter the Kalaram Temple to help them see God for the first time.

While Ambedkar saw the caste issue as a political problem, Gandhi considered it a social issue. Ambedkar sought political solutions to the problem, while on the other hand, Gandhi believed it could be solved only if the minds of people were changed. Ambedkar wished to abolish the caste system altogether since he believed that it could just not be modified since it was too deeply ingrained in society. Gandhi however, tried to bring about change in the mindset of the people instead. These led to several clashes between the two. But a consensus was reached with the Poona Pact that sought to provide representation for the Dalits in civil services, while also providing them with educational grants. 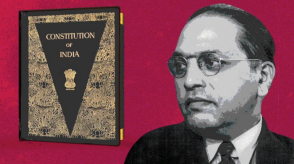 On 14 October 1946, Dr. Ambedkar converted to Buddhism along with 365000 of his Dalit followers. The major reason behind why he converted was his belief that Hinduism has a very rigid caste structure, which attempts to assert the hegemony of the ‘upper castes’ and has failed to bestow upon its followers many basic human rights. While Ambedkar announced his plans to convert in 1936, he took 20 years studying various world religions and then decided upon converting to Buddhism. But why did Ambedkar not convert to Christianity or Islam? He answered this question in his essay Buddha and Future of his Religion.

Ambedkar’s reasons for choosing Buddhism over other religions include the following:

Besides all these reasons, some scholars believe that Ambedkar converted to Buddhism as a sign of protest against his inability to secure separate electorates for Dalits and it is viewed as a form of political protest. 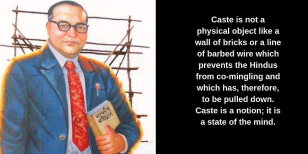 The Annihilation of Caste

Amongst the many literary works by Ambedkar is The Annihilation of Caste, is the most notable. It is a small, yet insightful piece that talks about the pathetic condition of Dalits. Ambedkar dismissed the caste system and talked about how the lack of social mobility negatively benefits the economy in the long run. He also mentions that ‘Hindus do not possess a consciousness of kind’ but possess ‘a consciousness of caste’. Ambedkar also talks about how the Chaturvarna system has been lethal for the Dalits - by denying them their political, physical, and educational rights.

Ambedkar discusses how marginalisation is legitimised in order to sustain the dominance of the ‘upper castes’. He also suggested two remedies for correcting the prevailing caste system: inter-caste marriages and the denial of religious scriptures. He advocated that people belonging to the ‘lower castes’ can achieve parity with other members of the society only when they build self-respect, get educated, convert to ‘less unequal’ religions such as Buddhism, gain political power, and take up a variety of occupations. The Annihilation of Caste provides an insight into Ambedkar’s ideas on social justice - he believed in liberty, equality, and fraternity. Ambedkar ensured there was total inclusion of the excluded groups and did not support discrimination on any grounds.

“A great man is different from an eminent one in that he is ready to be the servant of the society.”

“Freedom of the mind is the real freedom. A person whose mind is not free though he may not be in chains is a slave, not a free man.”

“Political Democracy cannot last unless there lies at the base of it, Social Democracy. What does social democracy mean? It means a way of life which recognizes liberty, equality, and fraternity as the principles of life.”

“Political tyranny is nothing compared to social tyranny and a reformer who defies society is a more courageous man than a politician who defies government.’

“Constitutional morality is not a natural sentiment. It has to be cultivated. We must realise that our people have yet to learn it. Democracy in India is only a top-dressing on an Indian soil which is essentially undemocratic.”

“Equality may be a fiction but nonetheless one must accept it as a governing principle.”