WEALTH CREATION: THE INVISIBLE HAND SUPPORTED BY THE HAND OF TRUST

For more than three-fourths of known economic history, India has been the dominant economic power globally, a major wealth creator and a significant contributor to the world’s GDP.

The Invisible Hand of Markets

Trust as a Public Good

Implications of Lack of Trust

ENTREPRENEURSHIP AND WEALTH CREATION AT THE GRASSROOTS

Entrepreneurship is an important strategy to fuel productivity growth and wealth creation in an economy. Entrepreneurs are seen as agents of change that accelerate innovation in the economy.

India’s aspiration to become a $5 trillion economy depends critically on promoting “pro-business” policy that unleashes the power of competitive markets to generate wealth. At the same time, it demands weaning away from “pro-crony” policy that favours specific private interests, especially powerful incumbents.

NOTE: Herfindahl Index measures the market concentration of an industry's 50 largest firms in order to determine if the industry is competitive or nearing monopoly. UNDERMINING MARKETS: WHEN GOVERNMENT INTERVENTION HURTS MORE THAN IT HELPS

The role of markets has been recognized globally wherein markets are allowed to enable wealth creation and thereby economic growth. But India has a regulated system and its high time that privatization and the role of the free market are analysed and incorporated in the economy. Other Challenges with the ECA 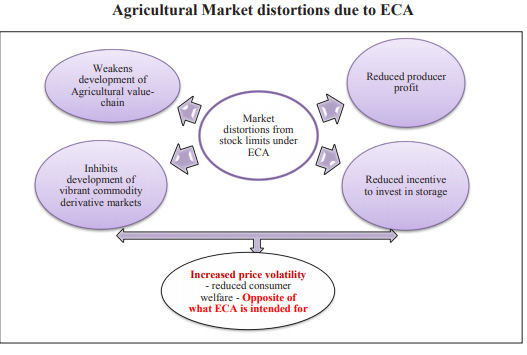 India is still stuck with several forms of Government intervention that are anachronistic with today’s economy. In several spheres of the economy, India has traversed the transition from a command and control economy to a market-driven economy.

Acts which Transformed to Market-driven Economy

However, several areas of unnecessary and inefficient government intervention still remain. The following are some key Acts, as low-hanging fruits to begin with, which have outlived their use and need to be repealed or amended to enable functioning of competitive markets.

Acts which Need to be Repealed/Amended

The government must systematically examine areas where the Government needlessly intervenes and undermines markets. It does not mean that there should be no government intervention; appropriate and relevant interventions are welcome, majorly at the regulation level. Eliminating instances of needless interventions will enable competitive markets and thereby spur investments and economic growth.

CREATING JOBS AND GROWTH BY SPECIALIZING IN EXPORTS IN NETWORK PRODUCTS

Integrating ‘Assemble In India for the World’ into ‘Make In India’ can set a precedent in making India a global manufacturing hub. India has to take crucial and defining steps if it wants to achieve an export-led growth and create jobs for its youth.

Current State of Trade and Exports

Reasons for India’s Underperformance in Exports

Which Industries should India Specialize in for Job Creation?

The Current Case of Network Products

Ease of doing business is the key to entrepreneurship, innovation and wealth creation. India has risen significantly in the World Bank’s Doing Business rankings in recent years.

Achieving Scale of Across Business

In 2019, India completed the 50th anniversary (Golden Jubilee) of the bank nationalization program undertaken in 1969.

Dwarfism of Our Banking Sector

The Market to Book ratio is a financial valuation metric used to evaluate a company’s current market value relative to its book value.

Reasons for Failure of PSBs

Ways to Enhance Efficiency of PSBs

The Benefits of Credit Analytics

Creation of a FinTech Hub for PSBs

The Case for Employee Stakes in PSBs

The Need for Best Talent

FINANCIAL FRAGILITY IN THE NBFC SECTOR

The problems faced by the Non-Banking Financial Companies (NBFCs) stems from their over-dependence on short-term wholesale funding from the Liquid Debt Mutual Funds (LDMFs). Any asset-side shock not only exacerbates the Asset Liability Management (ALM) problem but also makes investors in LDMFs jittery leading to a redemption pressure akin to a “bank run”.

Differences between HFCs and Retail-NBFCs

The UK Model of Privatization

IS INDIA’S GDP GROWTH OVERSTATED? NO!

As investors deciding to invest in an economy care for the country’s Growth in Gross Domestic Product (GDP), uncertainty about its magnitude can affect investment.

Change in the Base Year of the GDP Series

What the Economic Survey Concludes?

THALINOMICS: THE ECONOMICS OF A PLATE OF FOOD IN INDIA

Economics affects the common lives of people in tangible ways but this fact often remains unnoticed. A plate of food is something that people encounter every day. Thus, Thalinomics: The economics of a plate of food in India can become a prudent way to make economics relate to the common people.