This editorial analysis is based on the article “Handloom Day announcements look like a mix of the good and the bad, but are mostly foggy” which was published in the Indian Express on 21st of August 2020. It analyses the announcements made on the National Handloom Day 2020 and the challenges that lie ahead.

Sixth National Handloom Day was celebrated on the 7th of August 2020 and it was marked by many announcements by the Ministry of Textiles. Due to the COVID-19 pandemic, the day was celebrated on a virtual platform by the concerned ministry. These announcements pave way for much needed push for the handloom industry but it also poses some challenges.

Termination of the handloom, powerloom, wool, jute and silk boards:

New Handloom Portal: A handloom portal was launched on National Handloom Day along with a social media campaign to instil pride in the weaving community.

Meet The Maker campaign: The Fashion Design Council of India (FDCI), a not-for-profit organization that works to further the business of fashion in India and ensure its sustainable growth, launched campaigns including Meet the Makers which will promote the handloom makers. 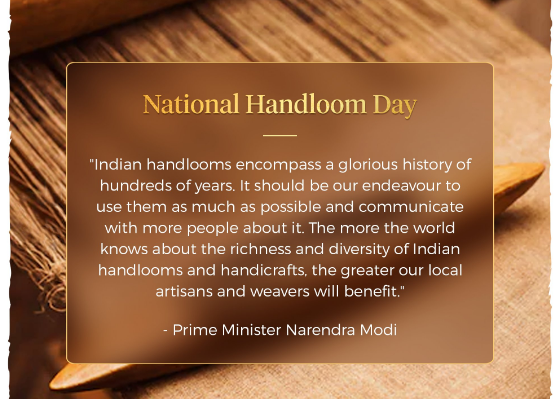 This editorial is based on “Step back from parochialism” which was published in The Hindustan Times on August 19th, 2020. Now watch this on our Youtube channel.