According to a recent study, Sambhar Salt Lake in Rajasthan is constantly shrinking with the degradation of soil and water quality and a decline in the population of migratory birds. 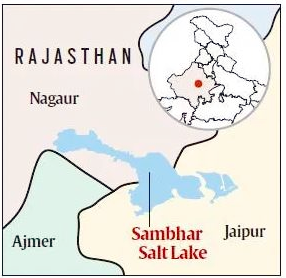 Sambhar Lake Development Authority should be formed by taking experts from multiple agencies. Also, coordination should be developed among the administration of three districts - Jaipur, Ajmer and Nagaur.